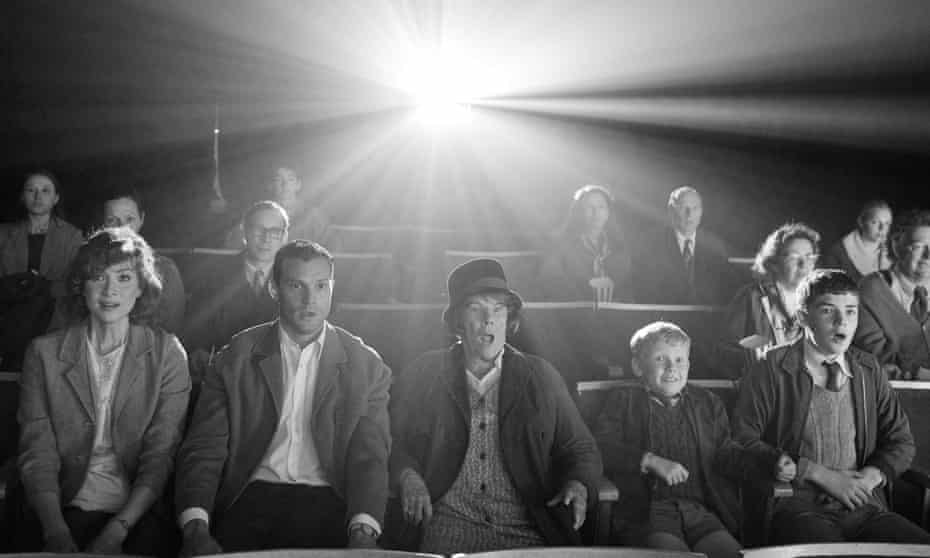 As Belfast starts, beginning in crisp colour and then fading into black and white, we the audience, are transported back to 1969. We are immediately given a glimpse of harmony, a tranquil moment of community and togetherness. This moment of bliss is broken within moments, shattered as petrol bombs and exploding cars hurtle through the previously calm local street. It is within this chaos that we start the story, witnessing the life of a family struggling to pay off old tax debts and wrestling with the choice of whether to stay in Belfast, their home, or move to England for the potential of a safer upbringing for the children.

The story is explored through the eyes of 9 year old Buddy, it brings an innocence to the world that is presented to us, a world which was the reality for so many, of course. Young Jude Hill, brings such a sweet performance, full of integrity as his character tries to understand the violence that is surrounding his life. Caitriona Balfe and Jamie Dornan, playing Ma and Pa, manage to create a really authentic feeling of family. One that truly loves each other, but is frightened, has disagreements and walks the paths of their struggles as one unit despite differing opinions at times. Dench and Hinds bring some of the lighter moments of comedy and an extra layer to to importance of family throughout a frightening and unsettling time.

It’s a movie of formal beauty, precise performances, complex and textured writing. While the bulk of the story is wrapped up in highly emotional drama, be that of the tensions between aggressive Protestants demanding that the Catholics leave the street (countered, of course, with neighbours who happily lived peacefully despite their differing beliefs) or the rising financial tensions in the home of our focal family; we are still treated to a through line of togetherness, despite all of the highly emotional events that take place in the story.

It’s a movie that seems to pack in an awful lot, while simultaneously maintaining the feeling of ‘just keeping on’. With a focus on people, their relationships and what is important, Branagh manages to still highlight some of the devastating political issues of the past. What keeps a relative lightness throughout the darkness is our young lead, the moments of innocence written in – such as the trip to the cinema to watch ‘Chitty Chitty Bang Bang’. The balance that Branagh achieves through both his writing and direction, is really quite brilliant. Neither the light nor the dark can be forgotten throughout this film, you can really sense the truth in its writing, reminding us that while darkness and awful situations descend around us, moments of joy can be found in unexpected situations.

Belfast is arguably the most personal story Branagh has told to date, written from his own perspective as a child growing up in Northern Ireland. It will have certainly captured the attentions of the awards circuit and I hope that it is enjoyed by many. Although not a film I would necessarily sit down to watch on repeat, it is a valuable audience experience and is worthy of the praise it’s receiving.