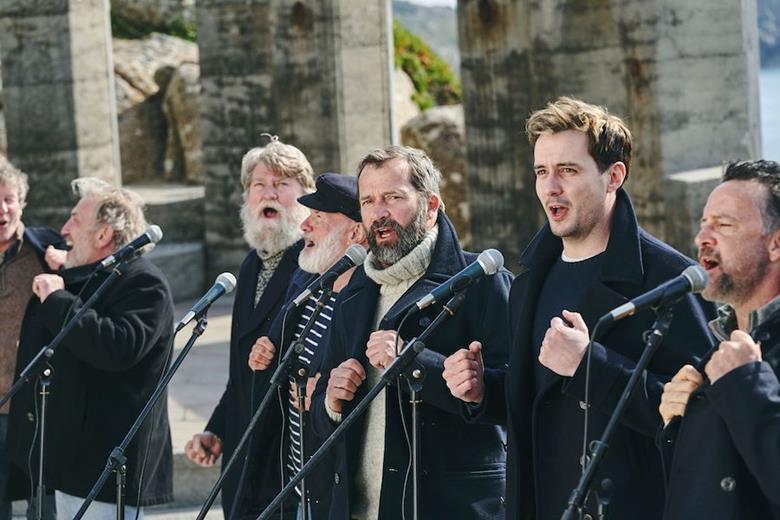 Fisherman’s Friends: One and All is the follow up to 2019’s surprise hit ‘Fisherman’s Friends’, the tale of a group of rough and ready fishermen who become recording artists after a music executive spots them while on holiday in Cornwall. Based on a true story it was just so very British – it was nice, featured a few catchy tunes, saw normal people succeed and gave a gorgeous glimpse into the Cornish coast and coastal life. While the first film sat nicely with audiences, was there enough story to make a sequel?

In short, probably not. But that hasn’t stopped audiences attending the cinema for a pleasant viewing – and that’s what you get. I can’t imagine anyone watching expecting a blockbuster.

The story picks up where the first left off. The harmonising fishermen have a top 10 album and a sell out show under their belts but with their record label asking questions over the chances continued success, some members of the group (and their families) struggling with minor fame and the group leader, Jim, in the midst of grief for the loss of his father. The premise is relatively simple; the group need a new member who once joins clashes significantly with Jim and Jim faces personal issues around substance abuse.

It’s a little scrappy and with a moment of high tension involving an accident at a derelict mine which seems random and a little out of place, it manages to maintain some of the charm of the first film but lacks a little magic ‘something’. While breezing over the themes of bereavement, substance abuse and male mental health issues it doesn’t really address anything and feels slightly like some issues were thrown in to appear progressive but just back out of any commitment to in depth themes. It was almost an interesting conversation where they matched small town, coastal folk with traditional opinions faced with a chance to learn about contemporary societal issues however, again, it felt like they took the safe route and backed out, throwing a bit of humour around the subject and trundling on through.

Its heart is undoubtedly in the right place but is quite predictable and the clash between simple fishermen and sharp London suits running the record label was covered in the first film. Having said this, it is an easy watch. The music is still entertaining and the light hearted nature of the film is just ‘nice’; a word often used as a negative but sometimes ‘nice’ is what we need.