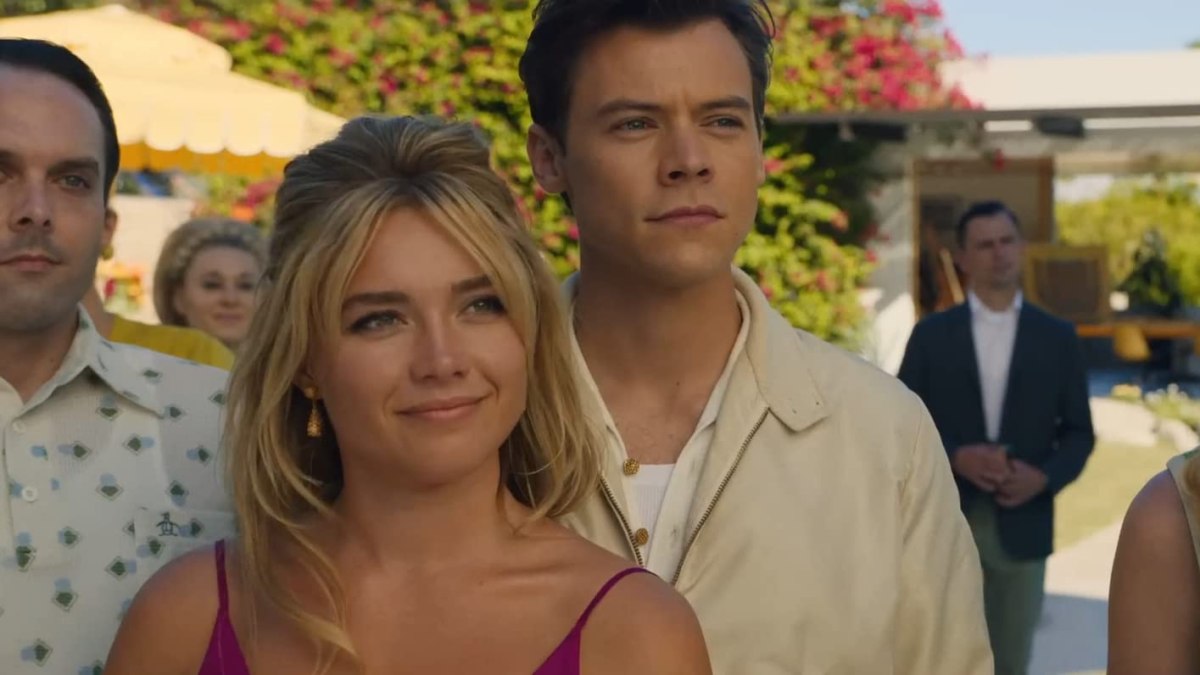 An intriguing tale of an unsettlingly pleasant American utopia, an all-star cast featuring some of the biggest names in todays film and music industry, as well as a story chock full of references to great cinematic landmarks which came before – Olivia Wilde’s latest feature sets out to be an extremely promising trip to the cinema. However, audiences have experienced many different reactions to the film, and though the consensus seems to be that ‘Dont Worry, Darling’ is far from as strong a film as the director’s 2019 debut, ‘Booksmart’, there’s still a great deal to discuss.

Aside from the ambitious storyline and the twisting narrative, the first thing most audiences seem to have highlighted after stepping from the darkness of the big screen and back into daylight, is Florence Pugh. Her leading role as Alice, the doting housewife to a charming, yet traditional husband, is undeniably the film’s greatest strength. Her performance maintains a great energy and passion throughout, which is perfectly reigned in for moments for tenderness and shock. The film often acts as a test of her characters’ stability, and Florence Pugh walks this line with the grace of a ballet dancer. Harry Styles takes up the role of Jack, the aforementioned 1950’s all-American husband, despite his British origins. In truth, it would be difficult for any performer to match the talents of Pugh as their co-star, but rather than the strength of the couple together elevating the inexperience of Styles, it seems to only highlight the issue in greater detail. As charming as he may be, there’s definitely a little clunk to his movements and delivery which may smoothen out in the years to come.

‘Don’t Worry, Darling’ is a beautiful film to watch. The American suburbia which filmmakers seem to love to corrupt, remains as entrancing, yet unsettling, as ever. A repeated reference to Ridley Scott’s ‘Thelma and Louise’, pays homage to one of the greatest female-led films released, but can quickly draw the audience into making comparisons between the two, which often seems to work against ‘Don’t Worry, Darling’s’ favour. Despite this, as simply a film to take in visually, whilst you recline into the comfort of your cinema seat, there’s a great deal to love here. The sets are intriguingly detailed, the cameras capture everything with a rich warmth, and moments of unexpected thrill wash over you in captivating bursts.

In terms of story, the film sadly seems to fall completely at its own squeakily-polished feet. The first ten minutes sets up what could evolve into a captivating narrative, but very quickly begins to meander into a dull repetitiveness, only to suddenly throw everything it seems to have forgotten to mention at the audience in the final half an hour. There are moments which absolutely need to be seen to be believed, but so much potential is wasted on unmotivated actions and inexplicable storylines. Amongst the ever-confusing actions of some characters, as well as the equally unengaging plot devices which seem to pop up only to further bamboozle audiences, there may be hidden a great film, but sadly ‘Don’t Worry, Darling’ most likely won’t be remembered as one.